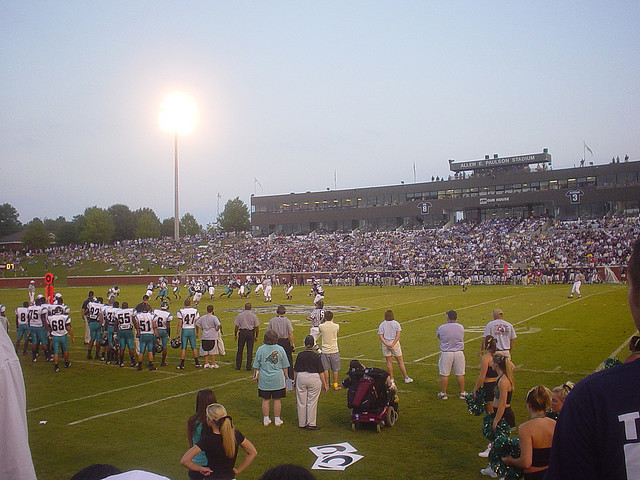 Every Monday on The Drive during football season we go through “What we Learned this weekend”. Every week I will post a column stating what I learned from college football and the NFL. There is no NFL this week so we focus solely on college football for a Labor Day Weekend.

Every weekend I make predictions and projections for what will happen in college football and the NFL. Week one is always the hardest because there are surprises every year. Some teams are not nearly what we thought and others excel to the point of winning national championships when they were barely ranked to start the year, see Cam Newton’s 2010 Auburn team.

I went 3-1 on my picks on the Ultimate Tailgate Experience, so it turns out I had a pretty good idea already of who Alabama was (the best team in the nation), and who Auburn was (a solid team but not as good as Clemson). But I still learned quite a bit… some of it was shocking. Here are the top 5 most notable things I learned from a Labor Day Weekend of College Football:

1. Coastal Carolina appears to be in good hands with Coach Moglia. However this is still slightly in doubt. Under Coach Rod Broadway, the UNC A&T Aggies are in good hands and I think they will have a winning season, but CCU is just a bigger, stronger, more athletic team and should have won the game. They did 29-13 and for the most part outside of an impressive drive to end the first half by the Aggies, the Chants appeared to be in full control the entire time. What really impressed me about this CCU squad is the way they came out in the 2nd half. After the Aggies drew within seven going into halftime the Chanticleers came out and marched down the field in 10 plays capping off the drive with a 33-yard connection from Hilary to Hazel. Coach Moglia had pulled Hazel aside during a timeout just before the play and said something to him. What ensued was a beautiful streaking run hit in stride down the middle of the field for a touchdown. The Chanticleer schedule becomes incredibly more difficult starting this week with a trip to Furman, so we should learn a lot more about CCU in their first road test against a tough opponent.

2. Savannah State will do anything for a buck, and Oklahoma State is happy to pay it. 84-0 was the final score of the season opener for the Cowboys. Yes, 84-0. They scored a touchdown with 1:32 to go in the game with the practice squad for Stillwater H.S. on the field. It was 35-0 after the 1st quarter and all the starters were pulled. It was worse than watching Pre-season of NFL Week 4. But Savannah State got paid $385k for posing as the whipping boy of OSU Football in week one. However even they aren’t sure if it was worth it, “We're going to have to readdress that. You get paid for certain things, but I don't know if at the end of the day, some things are worth the payments you get. But we'll see. Those are conversations we'll have.,” said Savanna State Head Coach Steve Davenport.

Not much he can do about it right now, though. The team that has won one game each of the last two years heads to Tallahassee next week to take on the Seminoles of Florida State. Awaiting them… another paycheck and a Vegas line of about 60 points.

3. Boise State is NOT a National Title Contender, and neither is Michigan State. I predicted this game as a “NOT Top 5” game of the weekend, and while the final score indicates it may have been good I hit this nail square on the head. Outside of Le’Veon Bell, the RB for Michigan State who rushed for 210 yards on 44 carries, had 6 catches, and score the only 2 TD’s of the game for MSU, these were two bad football teams who have rough days ahead. If you take Bells production out of the ball game the teams gained

402 yards… combined! There was a kid in Division III that nearly doubled that in passing yards this weekend setting an NCAA record. Boise State had 206 yards total. That is dreadful for one of the most high flying offenses in America. The new quarterback for the Broncos is Joe Southwick. And in his intro taking over for Kellen Moore, his line was 15-31 for 169 yards (5.5 per attempt, that’s like a rushing stat), with 0 TD and 1 INT. Boise State will lose by two touchdowns when they face an offense that knows what its doing when they face BYU in two weeks and they will officially be gone from national prominence for the 2012 season. So which non-BCS conference team can we look to this year to possibly crash the party…

4. How about an independent? Mike Leach is the new head coach at Washington State and there has been so much build up for the offensive master mind coming into the season opener. What did it pan out to… 0 Touchdowns… and a 30-6 whipping by the Cougars in Provo. The recently self proclaimed Independent will play it’s toughest schedule yet as an independent and I honestly believe they have the ability to run the table. Riley Nelson is the next QB in line looking to become a member of the list of BYU greats. He is a senior that took over the starting role last year mid-season, and in that position completed 57 percent of his passes with 19 Touchdowns and 7 interceptions. BYU has always been able to put up points and new offensive coordinator and former BYU QB, Brandon Doman, will try to keep that going. The offense looked just find against Washington State. The scary part about BYU? They are coached by a defensive coordinator, Bronco Mendenhall. The defense ranked 13th in the nation last year and BYU has won at least 10 games in 5 of the last 6 seasons. The schedule features games at Utah (their rival embarrassed them by running away with the game in the 2nd half last year), at Boise State, at Georgia Tech on Oct 27th and the highlight of the year will be the game October 20th in South Bend at Notre Dame…

Speaking of Notre Dame how impressive were they in Dublin? Navy is a very good football team and Everette Golson and the Irish made them look like any other warm up game that most of the big boys play in week one. Will the Irish run the table? No way. The schedule is way too hard. But 9 wins puts them in a BCS game and I have 7 wins right out of the gate when I look at their schedule. The problem? The 5 games I don’t have them winning with ease include at Mchigan State, at Southern Cal, at Oklahoma, home games again Michigan and BYU. They must win 2 of those 5 to get into a BCS game and not slip up against Pitt, BC, Stanford or Purdue. Good luck Everette.

5. Clemson and South Carolina are legit top 15 teams. What a start for the FBS teams from the Palmetto State this weekend. Lattimore returns from an injury and fumbles his first carry. Connor Shaw bruises his shoulder and had to leave the game for a period of time on the road against Vanderbilt. And Sammy Watkins is suspended for the opener against Auburn. If you would have told me all of that I would have absolutely projected a 1-1 start for the state of South Carolina at best. But here’s what happened…

Lattimore ended up rushing for over 100 yards and 2 TD’s. Shaw played with one good arm in the 2nd half and led a come from behind comeback win on the road in Nashville against the #16 ranked defense from 2011 that will be better this year. And on the Clemson side with Sammy Watkins sitting at home, DeAndre Hopkins was the one setting school records with 13 receptions for 119 yards and Andre Ellington put the team on his back carrying the ball 26 times for 231 yards. For those that are counting that’s an average of 8.9 yards per carry. And Boise State averaged 5.5 yards per completed pass this weekend. Clemson gets a couple weeks to shore up issues the coaches has with their performance when they play Ball State and Furman before the Atlantic division championship game on September 22nd in Tallahassee.

South Carolina needs to remain focused as they get a scrappy ECU team coming to Columbia this week. They should take care of business with UAB and then they will have their hands full with Missouri on the 22nd.

After Week 1, these teams were over ranked and do not belong in the top 25

Florida- Can this team go .500 this year? If you struggle with Bowling Green life will be difficult in the SEC.

Stanford- Andrew Luck comes around once every 10 years or so at a place like Stanford.

Boise State- Case made above. They will disappear from the OTR section when they lose to BYU in 2 weeks.

After Week 1, these teams should be ranked. Some of them may have to wait until week 2 or 3 for more teams to fall.

Notre Dame- Say what you want about Brian Kelly and the Irish, but this is at least a top 25 team. Maybe not a national championship team… yet. If Everette Golson continues to develop they will be next year.

Virginia- I’ve been saying how much I like this UVA squad all summer. They stated with a trap game against a very good FCS team in Richmond and they did exactly what FBS teams from BCS conferences should do to FCS teams. They were up 16-0 six minutes into the game, they gained 523 yard in the first 3 quarters, and they won 43-19. UVA will cruise by Penn State this week and then we find out how good they really are on the road against Georgia Tech.

North Carolina- These guys are good. Maybe people will believe me when they are 5-0 and preparing to host Virginia Tech on October 6th. One of my best friends is getting married that day. Thank you very much, Jon. I didn’t want to go to that game or anything.

BYU- If I’m going to rant about them having a shot at running the table and they aren’t even ranked, I better put them in this section.

Teams we still aren’t sure about after Week 1:

Southern Cal- Nice win, but they are ranked #1 and played Hawaii. But when will we know anything about these guys? They play at Utah on October 4th, Oregon at home on November 3rd and Notre Dame in the finale. Other than that they will favored by double digits every week.

Oklahoma- I applaud Bob Stoops for going on the road to UTEP to open the season. And then I shake my head and wonder why he did that. He was asking for a scary game. I think Oklahoma is good, but not sure after a 24-7 win when they had to pull away in the 2nd half.

Texas- Matt Parris said this was a landmine game against Wyoming. He was right. This was not an easy win but Texas could still be back to prominence. Right now they are over ranked in my opinion. I’m not convinced they are one of the top 15 teams in the nation. Very excited to see how the Longhorns fare from September 29th - October 13th… @Oklahoma State, home against West Virginia, and against OU at the Texas State Fair. My prediction… 4-2 on October 13th for UT and they will be ranked #20 in the nation which is exactly where they belong.

Aaron Marks is the host of “The Drive” on ESPN Radio 100.3 ‘The Team’ in Myrtle Beach, SC. “The Drive” airs daily from 4-6 p.m. M-F. Aaron is the play by play broadcaster for CCU Women’s Basketball and fills in for college baseball and H.S. Football game broadcasts. Follow Aaron on Twitter @AMonFM or e-mail him at thedrive@teammyrtlebeach.com