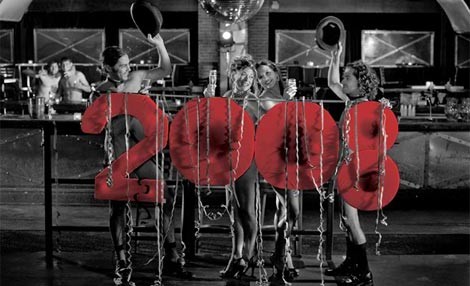 For nearly a decade, Lambrakos and Mabe dreamed of journeying to Africa to volunteer with AIDS victims. They had hopes of contributing their efforts to this global epidemic inflicting 2 million worldwide. Their vision became a reality when they composed the calendars and launched their Web site, helping them fund their mission.

These two brave women volunteered this past summer with Cross Cultural Solutions in the village of Moshi, Tanzania. They brought their services, as well as supplies like: soap, tissues, razors, all scarce necessities in their region of the world.

Their most profound hurdle was teaching the people of Moshi the truth about the AIDS epidemic. The Charleston City Paper says:
Lambrakos and Mabe found that their biggest challenge was breaking through stereotypes that discourage responsible sex and testing.

"It's nearly impossible for them to stop spreading it, the way they choose to ignore it," says Mabe. "We developed a peer education manual and talked to a lot of kids in the area. Doing condom demonstrations in the schools was like landing a spaceship there.

Now back from their voyage, Lambrakos and Mabe plan to make a 2009 calendar to contribute additional funds to the village of Moshi as well as lowcountry AIDS victims.

Find out more about their adventure at the Charleston City Paper.