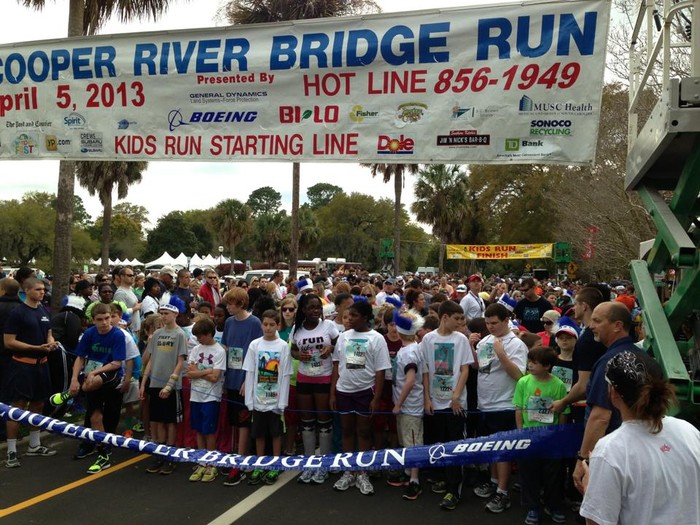 Runners at the starting line at the 2014 Kids Run & Wonderfest

The Cooper River Bridge Run (CRBR) is next weekend and everyone is gearing up for the award winning 10K race and the exciting events that surround it. One event to put on your list to attend is the Kids Run & Wonderfest.

Held at Hampton Park in downtown Charleston on Friday, April 4, 2014 from 11:00 am to 6:00 pm, this is a free family event that promotes a healthy lifestyle with a plethora of fun, free outdoor activities that lead up to the Kids Run at 5:00 pm. If you are not already registered for the Kids Run, you can register at the festival from 11 am to 4:30 pm. Kid registration is $10 and adult registration is $15, which includes a t-shirt, race number and medal.

The free festival is held from 11 am to 5 pm for anyone to attend and boasts countless activities including obstacle courses, inflatable rides, a rock climbing wall, a Monster Mobile Game Theatre with Wii Fitness and Zumba, yoga, pony rides, face painting, arts and crafts, K-9 dog training and much more. Free hotdogs, water and healthy snacks will be available in addition to on sight food vendors.

This is the second year the Kids Run has partnered with Wonder Works’ “Wonderfest” bringing several new additions including a “Wonder Works Toy Village” that is complete with the nation’s top toy vendors including Toysmith and toys that were actually invented by kids. One company to be featured is Two Bros Bows, a kid safe bow and arrow set invented by two brothers at the ages of 8 and 10. The two brothers are selling their bow and arrow sets to help raise money for college. National toy companies will have products available for sale where proceeds will benefit four local children’s charities including Keys For Hope, Abby’s Friends, Hugs for Harper and Happy Wheels.

After kids make their way through the toy village, they may receive a free toy while supplies last. Live kids entertainment will take place on the main stage all day. New entertainment for this year include Nashville, TN family band Proper Tension and local kid rock band Mad Crow.

Wonder Works owner and Wonderfest creator, Christine Osborne said, “With over 8,000 people that attended the Kids Run & Wonderfest last year, we wanted to make this year even bigger and better!"

This is the first year that the Kids Run has partnered with the Charleston County School District (CCSD) Wellness Initiative. Beginning at 12:00 pm, over 600 kids from 10 CCSD schools will compete on teams as a part of their CCSD Wellness Challenge.  The teams will race around the park where the team with the best time will win the Dave Spurlock Award. “I’m overjoyed that we could add this local component to the festival this year to promote and grow the CCSD Wellness Initiative in the Charleston community,” added Osborne.

CRBR Race Director Julian Smith added, “It is an honor to have Peyton’s artwork for this year’s Kids Run and Wonderfest. His design was a favorite among the community and the judges. This young man touched so many hearts, was such a huge part of the running community, and is a true inspiration to us all…so we are dedicating this year’s Kids Run to him!”

To learn more about the Kids Run & Wonderfest, visit. http://www.bridgerun.com/Kids_Run.