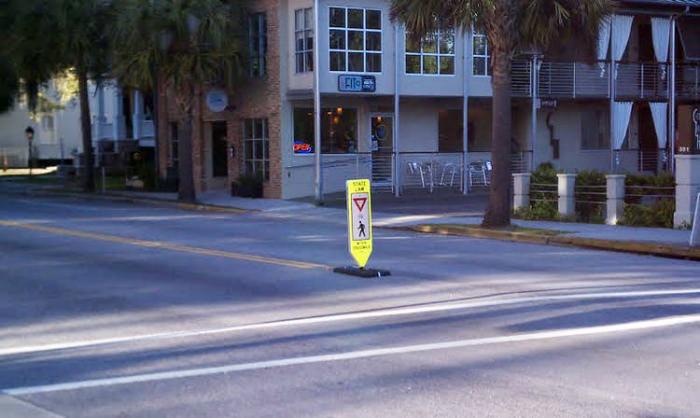 Update April 28: According to a photo with just a long cutline over at The Island Packet, the installation of new cameras and traffic signals along the Carteret corridor should be completed over the next couple of weeks.

You can check out the photo here.

Update April 12: A press release touting the city's "new steps to makedowntown Beaufort more walkable﻿" has been sent around with a few more anecdotes, for you musing:

“We’ll continue to work with the City and the (traffic) engineers to see what else we can do to make Beaufort a better town for people to walk to work and to play,” said Jon Verity, chairman of the Beaufort Redevelopment Commission﻿﻿.

As part of the improved pavement markings on Carteret Street, the S.C. Department of Transportation re-painted the crosswalks last year.

At Bay and Carteret, the traffic signals soon will hang from a new mast rather than strung across on wires. Recent bad weather delayed the work, but crews now are expected to have the intersection’s traffic signals redone by the end of the month, Beaufort City Manager Scott Dadson said.

In related news the city has been installing a number of bike racks around town, and here's some old musing I did about traffic and parking in downtown, though not directly connected to Carteret Street woes.

Updated April 6: Well it looks like the 'yield to pedestrian' signs have gone up at Port Republic Street over night.

Not much more to say on that other than: Yield, won't you?

Reported Feb. 4: While those hit in last weekend's auto-pedestrian collision at the Carteret and Port Republic streets crosswalk remain in area hospitals, the City of Beaufort is continuing its plans to improve pedestrians crossings on the U.S. 21 Business Route.

Not only will a new signal be added at Bay Street when the lights are replaced, Beaufort City Manager Scott Dadson says, the city will put "up a portable/centerline 'Yield to Pedestrians in X-walk' signs for the Port Republic crossing."

The design of that sign will be similar to those on Bay Street (pictured above.)

The city has been working with S.C. DOT on the plan and last summer reduced the speed limit from 35 MPH to 25.