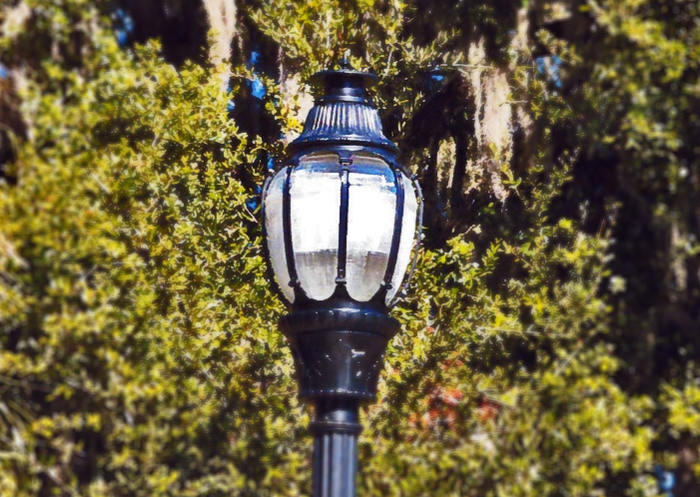 Update February 4: Apologies for the slow update but the matter of pedestrian crossings at Port Republic Street didn't come up and I wanted to get information from the city on that before filing this.

[Here's a report on the city's plans for the crosswalk.]

But I do want to point out The Island Packet's report from the meeting that talks a bit about the general support for the plans detailed below that describe the new light fixtures at Bay and Carteret streets, and the report talks about plans of city funding for better storm water drainage, landscaping, and general access on Reynolds Street at the Technical College of the Lowcountry that was last discussed on January 4.

First reporting: As the city installs new traffic light arms at the intersection of Bay and Carteret streets, it will enter a side discussion on new lamp posts for the intersection as the crosswalk buttons cannot be installed on the "goose neck" posts used around much of downtown.

This will come at the Tuesday, February 1, Beaufort City Council Worksession at 5 p.m.

Mainly the discussion  will center on whether or not to use the style of light (shown above) currently used on Bladen Street. It will also open a larger conversation about the lighting posts in downtown.

"During last spring's parking review, there was considerable discussion regarding the adequacy of downtown street lighting," wrote City Manager Scott Dadson in a memo. "Staff will be forwarding a proposal in the near future, to replace the remainder of the goose-neck lights on Bay Street with the new City fixtures."

I'll also be curious to see if the recent auto-pedestrian collision a block from the intersection will be brought up.

Also on the agenda

The council will also revisit the matter of repaving Reynolds Street at the Technical College of the Lowcountry that was last discussed on January 4.  At that time the college was asked to better evaluate the cost of some options and look at more city interconnectivity.

The final item is to revisit the Boundary Street Redevelopment plan, a discussion that at the very least will indirectly tie into the ongoing Olive Garden discussion.

You can view the full meeting agenda here.